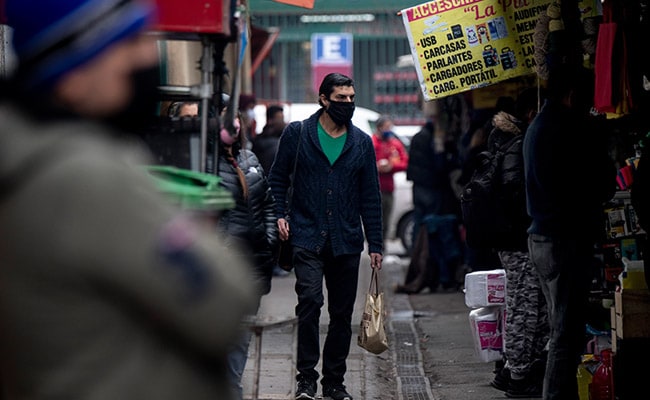 People visit a popular market in Santiago amid coronavirus pandemic.

During more than three decades of boom in Chile, the middle classes reaped the rewards, but just three months of the coronavirus pandemic has already reduced many to poverty.

When a protest movement took to the streets against inequality in October, it was largely led by the middle classes.

The protests dragged on for months, affecting many small businesses — and just as those were starting to recover, the coronavirus struck in mid-March.

With high levels of debt, facilitated by easy access to credit, and a lack of state support, a significant number of the middle class have been left in a vulnerable situation by the virus crisis.

“The richest 10 percent is the only sector relatively bulletproof in Chile,” said Dante Contreras, assistant manager at the Center for Social Conflict and Cohesion Studies (COES).

Contreras is also a professor at the University of Chile, which has calculated that poverty has risen from nine to 15 percent.

There’s an emergency family fund that was created to help people cope with the health crisis, but it only covers households bringing in less than 400,000 pesos ($490) a month.

That accounts for only 34 percent of Chilean households, meaning the entire middle class — which makes up almost half of Chile’s 18 million people — gets nothing.

“What you see in Chile is a high degree of fluctuation in household income. Families that leave poverty and families that return to poverty. And that is a snapshot of the high level of fragility that makes it difficult for them to take long term decisions,” said Contrerasa.

Pablo Martinez is a prime example. In just over one year, the 44-year-old has gone from a successful and solvent engineer living in an upper-middle class neighborhood to barely having enough to live.

Since being made redundant in March 2019, he has been unable to find work.

During the first few months he used up his savings and unemployment insurance.

He started working as a driver for Uber, but work slowed when the protests broke out in October and dried up completely when the virus lockdown began.

“If before we were critical, now we’re practically paralyzed,” Martinez told AFP.

Whereas before he “lived relatively comfortably,” now he cannot afford to pay the rent.

“There’s living or paying the rent, I can’t do both.”

He and his wife have opened a shop selling personalized gifts, while he also gives guitar and piano lessons over the internet.

But it’s not enough, and he doesn’t qualify for state help.

Surveyor Rodrigo Acevedo, 44, is in the same situation.

After his job was suspended, he had to lean on the employment protection law that was created during the pandemic so that employees could access their unemployment insurance.

The first monthly payment was worth 70 percent of their salary, but that diminished progressively.

His $1,200 monthly salary meant he didn’t qualify for state aid, and he had to take his daughter out of a private college and enroll her in a public school.

“We had no other option,” he told AFP.

In Chile, there is a wide disparity in the level of public and private education and health care.

Since 1990, Chile has dramatically reduced poverty from 40 to nine percent, but the middle classes improved their lifestyles through credit.

Now, 70 percent of those families live with unsustainable levels of debt.

A study by the University of Chile found that the self-employed had been the worst affected by the pandemic, seeing their salaries fall by 60 percent.

“The fall in the wellbeing levels of the middle classes is going to be significant,” said Contreras. “Even if they don’t fall into poverty, it will be a drastic change: changing from the private to public health system, the children’s schools or liquidating assets.”

Life has already changed for Pedro Castro, 54, a successful exhibition businessman whose business fell victim to the pandemic.

To make ends meet, he’s rented out his comfortable home in the trendy Nunoa neighborhood of the capital and moved his family to a cabin on the outskirts of Santiago.

“You have to go out onto the streets again,” Castro, who now sells purified water, told AFP. “To live off cards, off savings, to sell some machines to make money and payments.”

Where to buy a PS5: Restock updates for GameStop, Best Buy, Walmart, Amazon and Target

Above Normal Minimum Temperatures in Most Parts of North India, Snowfall Likely in J&K, Himachal, U’khand