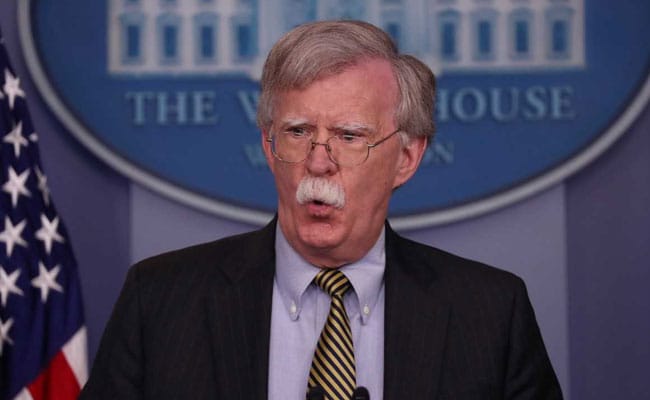 If reports were true it was “tantamount to an attack on Americans directly,” John Bolton said. (File)

Democrats and a leading Republican hawk on Tuesday called for U.S. President Donald Trump to consider imposing new economic sanctions on Russia if a reported Russian effort to pay the Taliban to kill U.S. soldiers in Afghanistan was confirmed.

Trump has been under pressure over a New York Times report on Friday that a Russian military intelligence unit had offered bounties for U.S. and allied soldiers and later reported that he received a written briefing on the matter in February.

After Trump initially said he was not briefed on the matter, the White House said Trump was not “personally” briefed but did not address whether he had received a written report, read it, and why he had not responded more aggressively if so.

“The President was never briefed on this, this intelligence still has not been verified, and there is no consensus among the intelligence community,” White House spokeswoman Kayleigh McEnany told reporters.

The shifting statements have generated controversy among Trump’s fellow Republicans as well as Democrats as he seeks re-election on Nov. 3.

“We should be considering what sanctions are appropriate to further deter Russia’s malign activities,” he told reporters after a briefing for House Democrats at the White House.

And Republican hawk John Bolton, Trump’s former national security adviser, told Reuters if the allegations were true it was “tantamount to an attack on Americans directly.”

“That requires a very serious response,” he said. “It could well be asymmetric economic sanctions.

The White House has sought to play down reports in the Times and the Washington Post that it knew of accusations that Russia paid the Taliban bounties to kill U.S. and coalition troops but had not briefed Trump or acted on the information.

A fifth person familiar with the matter said such intelligence was first brought to the White House’s attention around March 2019 but it was then uncorroborated and “could have been disinformation.”

The newspaper said it was in the President’s Daily Brief (PDB) document – the premier product of U.S. intelligence agencies that is prepared for him to read.

A U.S. government source told Reuters material is sometimes included in PDBs so that other officials can evaluate it.

In this case, the source said that the matter was raised at a high level earlier this year, the intelligence is regarded as credible, and steps were taken to formulate a response.

The source suggested a response was still under discussion and Trump arguably did not have to be involved while the information was checked out.

However, a congressional source voiced skepticism that such information would be included in a PDB with an expectation the president would not read it and that others would deal with it.

On Tuesday, the New York Times reported that U.S. officials had intercepted data showing big financial transfers from an account controlled by Russia’s military intelligence agency to a Taliban-linked account. It said this eased disagreements in the U.S. intelligence community and undercut White House officials’ claim that the intelligence was too uncertain to brief Trump.

‘Couldn’t believe Mahi bhai said something like that to me’: Stuart Binny reveals what MS Dhoni told him on Test debut