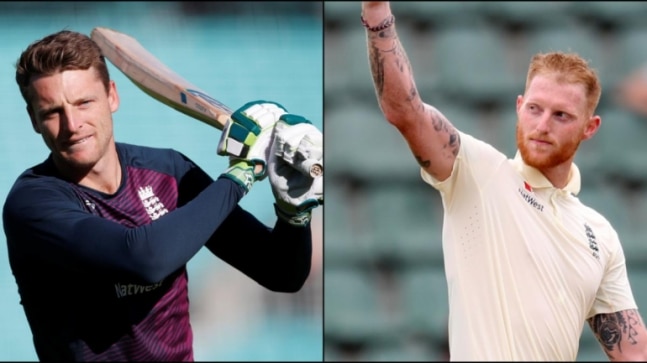 England will kickstart their home summer which marks the return of international cricket following the Covid-19 pandemic break with a 3-day practice game at the Ageas Bowl, Southampton from Wednesday, July 1.

The 27-man England squad has been split into 2 teams of 13 and 14 players each and will be led by Ben Stokes and Jos Bultter.

On the side led by Stokes, the likes of Jonny Bairstow, Moeen Ali, Keaton Jennings and James Anderson are star names while the likes of Rory Burns, Ollie Pope, Sam Curran, Mark Wood, Jofra Archer and Stuart Broad are the big names in Buttler’s team.

Notably, Stokes will be leading England in the first Test against West Indies, starting July 8 at the Ageas Bowl as Joe Root will miss the fixture to attend the birth of his child. Stokes, who has served as England’s test vice-captain since his appointment in July last year, will become England’s 81st test captain, while Buttler will assume vice-captaincy duties.

Key battles for spots in the playing XI

Despite not being a first-class game, there is a lot to look forward to in the 3-day practice game as England will pick the playing XI for the first Test after the match.

There are quite a few players jostling for spots in the playing XI for the first Test. While fast bowler James Anderson and Stuart Broad are automatic choices along with seam-bowling all-rounder Stokes, there is competition for the 3rd fast bowler slot among Jofra Archer, Mark Wood, Chris Woakes and Sam Curran.

In the absence of Root, there is competition for the middle-order slots as well with the likes of Joe Denly, Zak Crawley and Dom Sibley eyeing the positions.

Meanwhile, Moeen Ali, Jack Leach and Dom Bess will also be battling for the lone spinner’s spot in the playing XI.
Buttler is expected to take wicketkeeping duties but it will not be surprising if Jonny Bairstow finds a place in the XI as a pure batsman.

The 3-Test series which will be played in a bio-secure environment at the Ageas Bowl in Southampton and the Old Trafford in Manchester. The Test series was initially scheduled to be played in June in Oval, Lord’s and Edgbaston but it was postponed due to the outbreak of the novel coronavirus pandemic.

The 7-week tour will only be held in two venues which are ‘bio secure’ and have hotels attached to the stadiums or nearby the cricket grounds.

West Indies arrived in the UK as early as last month and have been training and staying in bio-secure environments.

TikTok Banned in India: Here's How You Can Download Your Videos and Data

HYDERABAD: At a time when students planning to pursue their masters degree from overseas institutions are rethinking their decision, those…