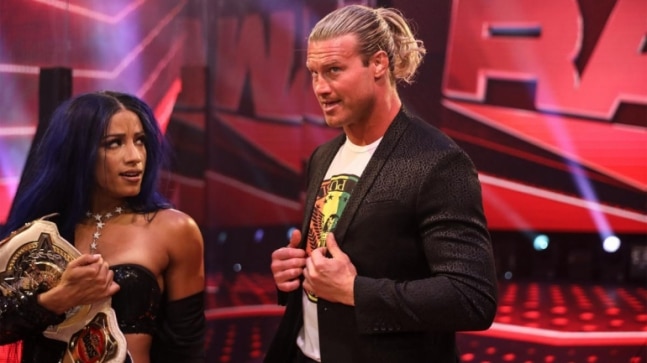 WWE Raw June 29 results: Dolph Ziggler and Sasha Banks signed their contracts before winning a mixed tag team match against Drew McIntyre and Asuka on Monday Night Raw of the WWE on Monday.

Dolph Ziggler and Sasha Banks signed their contracts before winning a mixed tag team match against Drew McIntyre and Asuka on Monday Night Raw of the WWE on Monday.

As Bayley and Sasha Banks were beating Asuka, Dolph Ziggler arrived and called Drew McIntyre as the two men were involved in a face-off.

Last Monday, two huge championship matches were set for Extreme Rules: The Horror Show: WWE Champion Drew McIntyre vs. Dolph Ziggler and Raw Women’s Champion Asuka vs. Sasha Banks. Now, all four Superstars will be in the ring at the same time, as Samoa Joe officiates what is sure to be a contentious double contract signing.

Though Rey Mysterio and his son Dominik stood united in the ring last Monday, it nearly ended in horrific fashion, as The Monday Night Messiah tried to subject Dominik to the same gruesome eye injury as his father.

Stage is set for a big match-up between Big Show and Randy Orton after the former called out Orton. Instead, Andrade, Garza and Vega came out, infuriating Big Show.

Ric Flair made an appearance on RAW as he warned Big Show to not cross Orton’s path.

(With inputs from WWE)

Mohammad Hafeez and 5 others will journey to England to affix the Pakistan workforce in Worcestershire.© AFP Six Pakistani cricketers,…