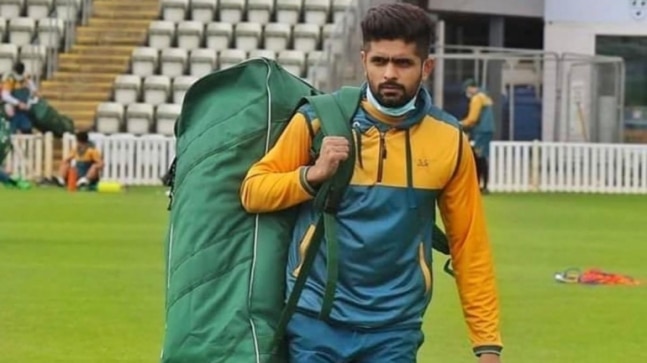 Pakistan have begun training for their much-anticipated Test series against England in August-September after arriving in the UK on Sunday.

20 players and 11 staff members arrived in Worcestershire on Sunday and returned negative tests for Covid-19 earlier this week. All the members of the touring party are in a 14-day quarantine in a biosecure facility in Worcestershire.

Star batsman Babar Azam took to social media to share his delight after having returned to training following the enforced break due to the novel coronavirus pandemic. Pakistan players and the support staff were seen taking to the nets at the training facility in Worcestershire.

“Great feeling to be on the cricket field again. I really missed it. Look forward to our historic series and praying that everyone gets back to their normal life soon. Keep shining and never give up,” Babar said in a social media post.

Great feeling to be on the cricket field again. I really missed it. Look forward to our historic series and praying that everyone gets back to their normal life soon. Keep shining and never give up. #RiseAndRise pic.twitter.com/MvTyuCFmx7

In photos shared by Pakistan Cricket Board, Pakistan head coach Misbah-ul-Haq was seen interacting with the players. Under the watchful eyes of leg-spin great Mushtaq Ahmed, leg-spinner Yasir Shah was training while Waqar Younis was overseeing the pace bowlers at the training session. Notably, Younis Khan was also roped in as batting coach for the Test series against England.

It will be a stiff test for Pakistan as they have landed in the UK with an inexperienced pace attack. Of their frontline quicks, only Mohammad Abbas has played test matches in England, with the exciting Shaheen Afridi and 17-year-old Naseem Shah having only 12 test caps between them.

Pakistan have not lost a Test series to England since 2010 as they have managed draws on the previous two tours to England in 2016 and 2018. However, England have also not lost a home series since 2014 and are expected to maintain their streak against Pakistan.

Pakistan players went through a series of Covid-19 tests after which it was initially found out that 10 of them, including veterans Mohammad Hafeez and Wahab Riaz, tested positive for the novel coronavirus.

However, PCB on Tuesday confirmed 6 of the 10 cricketers have returned negative Covid-19 results after a 2nd negative result earlier this week.

Hafeez along with Fakhar Zaman, Mohammad Hasnain, Mohammad Rizwan, Shadab Khan and Wahab Riaz tested negative for the second time in three days and will join rest of the team in Worcestershire.

“The PCB will now start making their travel arrangements and the departure details will be shared in due course,” the PCB said in a statement.