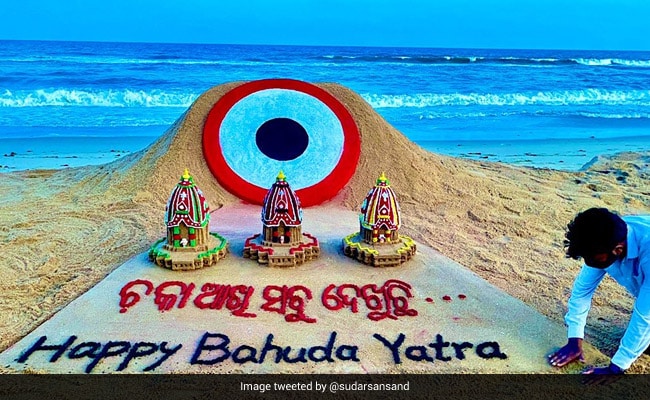 Lord Jagannath and his siblings, Goddess Shubhadra and Lord Balabhadra, returned from their aunt’s place at Gundicha Temple to Jagannath Temple today. This journey is known as Bahuda Yatra. Nine days after the Rath Yatra, the Bahuda Yatra or the return journey takes place.

The Jagannath Rath Yatra that started on June 23, culminated today on Devshayani Ekadashi, a holy day in the month of Ashadha in the HIndu calendar.

According to the authorities, 500 people who tested negative for COVID-19 pulled the chariot today. Preparations had begun from early morning and the yatra started after noon. As ordered by the Supreme Court earlier, in view of the pandemic, the festivities have been largely scaled down. No devotees have been allowed today to pull the rath.

Odisha Chief Minister Naveen Patnaik greeted people on the occasion of Bahuda Yatra. He tweeted beautiful photos of the chariots of Lord Jagannath, Balabhadra and Shubhadra.

Senior BJP leader Baijayant Panda also wished people today. “Greetings to all on the auspicious occasion of Bahuda Jatra, the return journey of Mahaprabhu Jagannath and his sibling deities from the Gundicha Temple…Kudos to devotees for exercising restraint and maintaining such exemplary, historic discipline,” the BJP leader wrote on Twitter.

Greetings to all on the auspicious occasion of #BahudaJatra , the return journey of Mahaprabhu Jagannath & his sibling deities from the Gundicha Temple after #RathaJatra
Kudos to devotees for exercising restraint & maintaining such exemplary, historic discipline#BahudaYatrapic.twitter.com/3YSRnzoTSv

Lord Balabhadra’s rath or chariot was the first to set off, followed by sister Shubhadra. Lord Jagannath’s chariot, the Nandighosha, followed last.

The titular King of Puri, Maharaj Gajapati Dibyasingha Deb performed the ‘sweeping’ ritual just like it has always been done historically.

During the journey back to Jagannath Temple, the three chariots stopped for a while at the Mausima Temple also known as Ardhasani Temple. ‘Poda Pitha‘, a special sweet made of coconut, rice and jaggery was offered to the holy Trinity at Mausima Temple.

Sachin Tendulkar advised Rahul Dravid to send me at No.3, not Greg Chappell: Irfan Pathan

AirPods design: Which option do you prefer – 9to5Mac