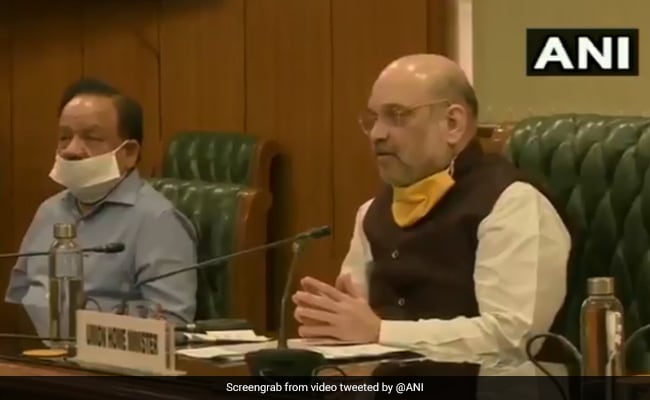 The review was a routine meeting, officials said (Representational)

Union Home Minister Amit Shah on Wednesday reviewed the COVID-19 situation in the country with Union Health Minister Harsh Vardhan and senior officials of their ministries, officials said. It was a routine meeting, a home ministry official said.

Apart from Harsh Vardhan, others who attended the meeting included top officials of the health and home ministries, the official said.

Over 6 lakh people have been infected by coronavirus and at least 17,400 have died across the country.

India registered the highest single-day COVID-19 deaths with over 500 fatalities on Wednesday with Maharashtra, Delhi and Tamil Nadu accounting for over 70 per cent of the deaths, while over 18,000 new infections were reported, according to health ministry data.

This is the fifth consecutive day that coronavirus infections have increased by more than 18,000. The country has seen a surge of over 3.94 lakh infections from June 1 till date.

“Thus, around 59.43 per cent of patients have recovered so far,” an official said.

No need for Plan B for Europa League final eight in Germany: UEFA

Apple May Use Cheaper Battery Parts to Save on Costs in iPhone 12: Ming-Chi Kuo