A war of words has broken out on Twitter between Union Minister of State V Muraleedharan and Congress Lok Sabha MP Shashi Tharoor over the dispersal of Rs 1 crore in MP-LADS funds towards either research into COVID-19 test kits or their purchase.

MP-LADS funds, which have been suspended since April “for managing health and adverse impact of outbreak of #COVID19 in the country”, are a fixed sum of Rs 5 crore allotted to each MP every year to develop his or her constituency.

Mr Muraleedharan, posting the response to a RTI (right to information) query over Mr Tharoor’s claim of donating Rs 1 crore to a medical research institute in his constituency of Thiruvananthapuram.

RTI plea busted @INCKerala MP @ShashiTharoor‘s claim of donating ₹1 Cr. MPLADS fund to @sctimst_tvm. They did not receive the fund either for R&D or for the purchase of Test Kits. Stop #Lying! @narendramodi@AmitShah@JPNaddapic.twitter.com/5FH3aAyroR

Shashi Tharoor, who said in April that he had “put my MP funds to good use just before the government cut them”, responded in a series of tweets that hit out at the Union Minister and accused him of being “disgraceful” and “lying”.

“It’s pretty disgraceful when a Minister, who can easily check the facts, lies by accusing an MP of lying. Please read the thread that follows & take back your invective,” Shashi Tharoor wrote.

1/8 A scurrilous tweet by a BJP MOS, @VMBJP , accusing me of “lying” about donating 1 cr to the Sree Chitra Thirunal Institute for Medical Sciences in Thiruvananthapuram, prompts this detailed clarification. The grant was authorised on 30 March before GOI suspended MPLADS funds. pic.twitter.com/txwOKhXbke

In his tweets Mr Tharoor explained the institute’s “strong history of path-breaking innovation” and the “calibre of its scientists” had encouraged him to donate the money in the first place.

Mr Tharoor then clarified the money had been given as “funding against purchase” by request of the district administration (which is the nodal agency for distribution of MP-LADS funds).

“Why? The government’s own revised MP-LADS guidelines did not allow support of development and so only purchase could be authorised. Accordingly, allotment was made by letter on March 30 giving Rs 1 crore on the understanding that SCTIMST would get the funds once kits were developed,” Mr Tharoor explained.

“This is straightforward but since V Muraleedhran has tagged Narendra Modi and Amit Shah perhaps they can provide an answer to my next questions,” the Congress leader continued.

Shashi Tharoor then asked the Prime Minister and Home Minister why test kits developed by two government-run research institutes – including the one to which he had donated his funds – still lacked the centre’s approval. 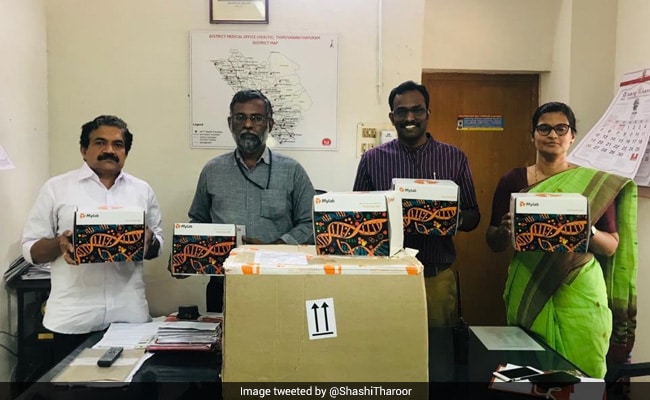 “On the other hand, private labs had their kits approved in a matter of days. Can any of you explain why our institutes have been kept waiting for this long?” he asked.

Mr Tharoor pointed out that for his funds to be put to good use test kits needed to be produced and made available for purchase and that this could only happen if the government supported “our institutes and approve their kits instead of sitting on Twitter”.

“If the government’s argument is that the kits are not yet ready for production, then why is a government minister attacking me publicly for something his Government has been delaying?” Mr Tharoor asked

Hitting out at the BJP for its “shameful pattern” of failing to do its job and then attacking the opposition, Mr Tharoor criticised “the cretinous tweet” by Mr Muraleedhran and demanded he apologise for his accusations “when I’ve been fully transparent”.

Shashi Tharoor ended his long thread with a question for Mr Muraleedharan, asking if either he or his colleagues could explain what happened to the Rs 7,900 crore in suspended MP-LAD funds.

‘If he can play against Ashwin and get a double hundred, he’s good enough’: Darren Gough lauds Dom Sibley